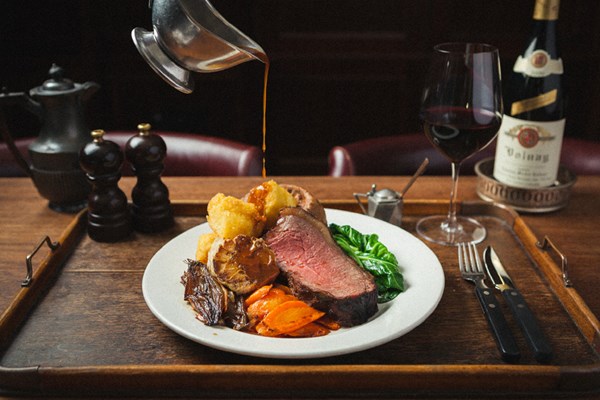 When we think about the UK from a foodie perspective, London (justifiably) captures most of the attention. Over the past couple of decades, in particular, the city has really exploded as a top-notch culinary destination, featuring awesome food from all over the world

The rest of the country still has a somewhat mixed reputation for food, but in the bigger cities, you can still find some excellent places to enjoy a meal. Here, I’ll touch on a few such places in Manchester – a city well worth visiting for many different reasons.

Hawksmoor is considered to be among the best places in town for genuine foodies. It’s a classy, modern joint with a focus on simple ingredients: protein, vegetables, and a few nice sides. The steaks are perhaps the highlights, but there are plenty of other options as well.

The cocktail menu at Hawksmoor also gets a fair bit of attention, thanks to creative options like the Marmalade Cocktail and the Gunpowder Fizz.

As a bonus, this is a terrific restaurant to visit if you want a feel for the city as well. It happens to be located right on the edge of Castlefield, an “Urban Heritage Park” that’s an excellent place to begin exploring Manchester and which is ranked as one of the town’s top attractions.

Just around the corner from the Manchester Art Gallery, Arnero Restaurant is a great place to enjoy some of the best foreign food England has to offer: Indian cuisine. London, in particular, has become known for perhaps the best Indian food in the world outside of India itself, but the tradition has spread to Manchester through Arnero.

Blending traditional preparations with a few modern twists, it has all the flavors you’ll expect if you happen to be a fan of Indian food. The atmosphere is pretty casual, but not to the point of being anything less than pleasant; if anything it just keeps the focus on the menu.

This is less of a culinary hotspot and more of a cultural experience. It’s actually located inside of Old Trafford – the famed stadium of one of Europe’s greatest football clubs. Manchester United has a storied history and happens to be excellent these days as well. Along with Chelsea in London, they were listed as favorites for the Premier League for 2017-18, and that should only make Red Café more enjoyable.

Basically, it’s a casual eatery designed entirely to encapsulate the spirit of the club, and by extension Manchester itself. If you like to focus your travel eating on soaking up the local culture, it’s a great place to start.

Time Out called this trendy restaurant a harmonious marriage of British and Italian food, which is to say it’s just really great modern dining! Like Hawksmoor, it’s in the Castlefield area, which makes its atmosphere that much more pleasant.

Outdoor seating is a treat, though the interior is chic and modern and offers its own good vibe as well. As for the menu, it’s small enough that you can get by just asking a waiter for a recommendation or choosing an appealing special; you won’t be overwhelmed. But I’d recommend focusing on the pasta or pizza for a first visit.

It wouldn’t be a proper write-up of Manchester area dining if we didn’t at least touch on gastropubs. Truth be told there are a lot of them that would be worthy of the list, but The Wharf is considered by many to be the best.

With a focus on comforting bar food and fish dishes as well as a ton of local ales, it’s just a cozy place to hang out. There are fires during the winter, beer garden tables for when it’s warm, and always pleasant patrons to mingle with.